When My Driving Academy was founded in 2013, traffic education in Sweden was highly fragmented and one of the few remaining consumer industries that had almost entirely escaped digital development. The whole process of obtaining a driver’s license—from securing a permit to studying, practicing, and passing the test—was time consuming, disorganized, and stressful. And it was not adapted to the digital convenience standards demanded by a primarily young consumer group.

Intent on consolidating the market and disrupting established working standards, My Driving Academy set out to create the best traffic school in Sweden. Developing a central, mobile-friendly platform became a critical part of that equation.

Towards the end of 2017, My Driving Academy contacted us at Fastdev to help develop a solution that would enable a drastically smoother journey for securing a driver’s license. They wanted an all-in-one digital platform and app where driving students could easily study theory, book and pay for driving lessons and courses, track their development, and communicate with instructors.

A team of Fastdev developers was assembled for the project under the direction of My Driving Academy’s CTO Jason Davis.

Keeping costs low and producing a working solution as quickly as possible was a priority from the start. For this reason, it was decided that instead of building a solution from scratch the team would customize an “off-the-shelf” technology stack.

“Other people think you have to build from scratch, but you end up making all the same mistakes at ten times the cost,” says Jason. “I don’t want to reinvent the wheel. Our approach was to take it and glue it into what we have. That way, we could focus on the integration work and creating the best possible user experience at a much faster speed.”

A core functionality in their requirements was a platform for managing, selling, and marketing time slots. After investigating several options they ultimately chose SimplyBook.me, which was originally created for hair salons. Since one of My Driving Academy’s primary roles is selling time slots to driving students, it was an ideal fit.

Now the big task for Fastdev developers was to dig into the architecture and APIs of SimplyBook.me and discover what integrations and customizations were needed to transform it from an off-the-shelf solution to a solution optimized for their business.

The first step was creating an action plan and defining what features could be met with the current off-the-shelf solution, and what needed to be built from scratch. Together with My Driving Academy, our developer team ran through the initial prototype to explore what was both possible and most economical when it came to removing existing roadblocks and creating a more customized user experience.

A new basic prototype of the platform was created that contained all of the essential components: an interface for students booking driving lessons; an Instructor Dashboard built from scratch to enable teachers to view bookings and access a progress report card for each student; and a learning interface where students can practice multiple-choice test questions on driving rules.

To make the booking process as smooth as possible, a creative solution was required to ensure the two different databases were effectively synched. Next, the developer team integrated critical third-party systems such as Klarna Checkout and Intercom. Then they made adjustments to ensure the system complies with GDPR (General Data Protection Regulation).

Finally, the developers polished the code and made additional architectural changes to ensure a seamless user experience. To realize a complete solution, a few components were built from scratch including a cashing system to speed up loading time, a checkout timer that secures timeslots for a defined time period during checkout, and a hybrid chat solution that allows students and teachers to chat for free while eliminating the cost of a third-party solution.

Today, after using the first generation platform for just over a year, My Driving Academy has been able to realize their dream of digitalizing the driving school experience. Their all-in-one platform combines over 100 years of collective teaching experience with more than 1,000,000 data points of user statistics to create an optimal training process for each student—far exceeding anything their competitors are offering.

“We have data showing that a student who follows the My Driving Academy’s training steps, on average, doubles their probability of passing the theory test, while the time spent preparing for it is cut in half,” reports Jason. 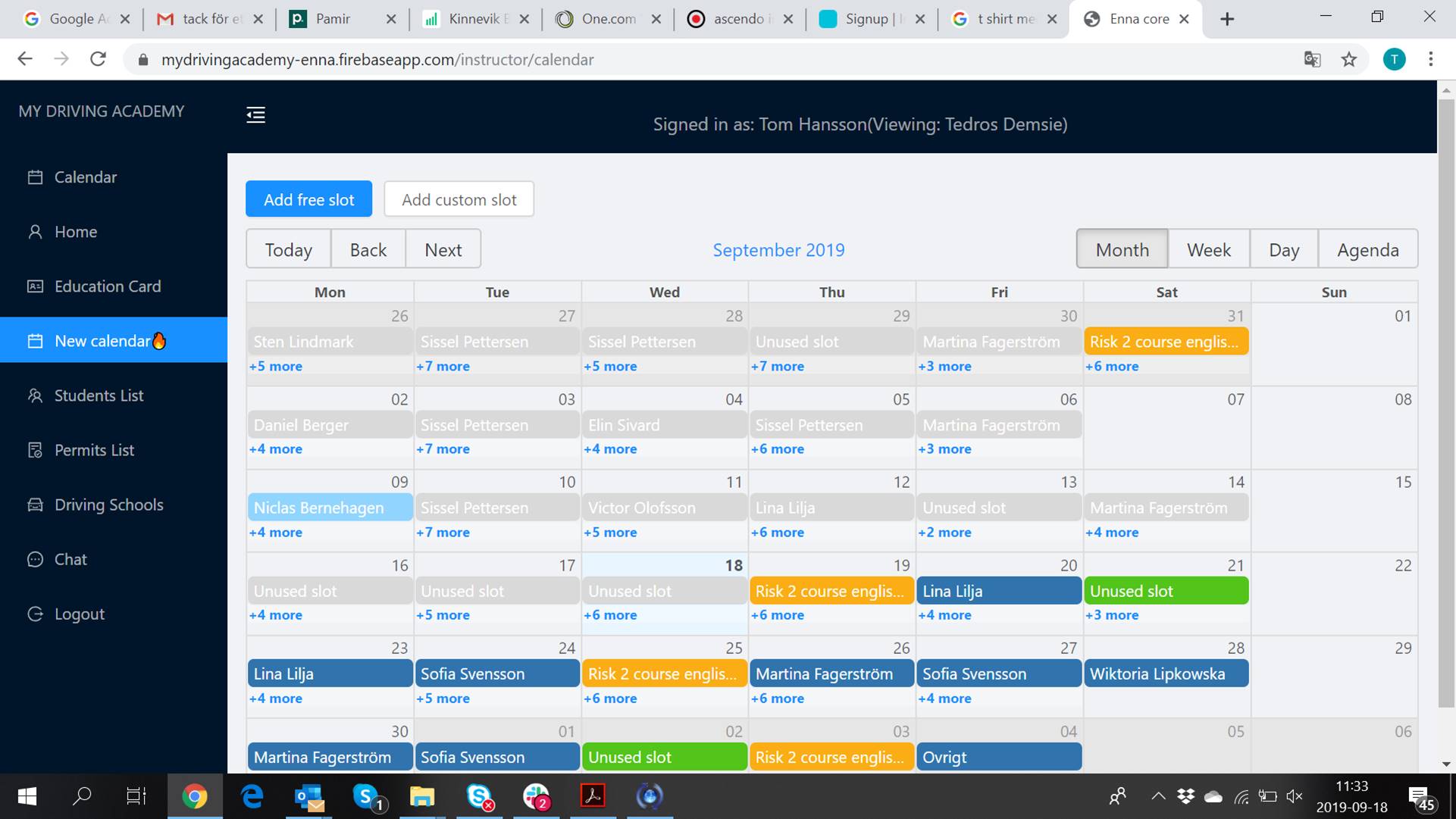 The Instructor Dashboard enables teachers to view bookings and access a progress report card for each student. 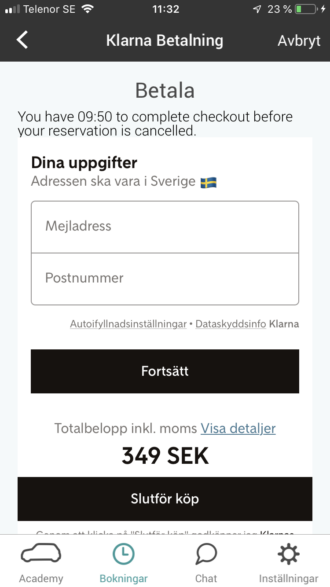 A timer secures users’ driving lesson time slots for a defined period of time while they complete the checkout process.

“It was way faster to build off-the-shelf,” says Jason. “If we had built it from scratch it would have taken at least one year. We started on November 1st and launched about four months later— we saved at least eight months.”

My Driving Academy’s CEO Tom Hansson is also excited about the results:

“Every year, about 20% of all driving students in Sweden download the My Driving Academy app. Of these students, approximately 1,000 are utilizing the entire My Driving Academy offer—using theory the exercises and booking driving lessons via the app.”

“The next step will be to further personalize the training steps in the app so that it becomes even more relevant and as effective and cheap as possible,” he adds. “Thanks to Fastdev’s impressive flexibility, we can continue to develop the service in the direction we want.”

Our site uses cookies so that we can remember you and understand how you use our site. If you do not agree with our use of cookies, please change the current settings in your privacy preferences. You can also read more about cookies and similar technologies here. Otherwise, you agree to the use of the cookies as they are currently set.
Read full version

In order to properly handle and protect your personal data, we follow the Data Protection Regulation (EU) 2016/679 (GDPR) and the related best practices.

By personal information we mean your name, email address, telephone number or other contact information.

The policy does not fall under Fastdev’s General Terms and Conditions, but is considered as documentation of Fastdev’s approach to confidentiality and privacy issues for non-customers.

Simply visiting our website does not require that you provide any personal information.

If you choose to contact us via the contact form on our website, via email or telephone, we collect the personal information you provide us with, such as your:

We also take note of what company you represent.

We use your personal information to communicate with you regarding whatever service you have requested, or about our services in general.

We document all of our communication with you.

How do we protect your information?

We protect your personal information against unauthorized access or other processing that is not GDPR compliant.

We restrict access to your personal information to those employees who need to access it in order to communicate with you regarding our services.

We do not share your personal information with any third parties.

We delete or de-identify your personal information if it is no longer relevant to communicate with you regarding our services.

If you wish to exercise your rights according to the above, you must request it in writing along with your name, address and email address, by sending an email to the address listed in the contact details below.

Fastdev will process inquiries according to the above promptly and send a reply within 30 days from the day the request is received.

If we do not approve your request, for whatever reason, you can complain to the Swedish Data Protection Authority by sending an email to datainspektionen@datainspektionen.se.

Fastdev reserves the right to make changes to this Policy at any time to the extent that the changes are necessary in order to comply with legal or technical requirements. All policy changes will be published on this website. The date of the latest change is published at the bottom of this page.

If you have any questions, please contact our Data Policy Officer via email at dpo@fastdev.se or via mail at Fastdev AB, Box 191 88, 104 32 Stockholm.